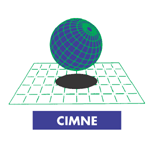 Centro Internacional de Métodos Numéricos en Ingeniería (The International Centre for Numerical Methods in Engineering; CIMNE) is a research organisation in Barcelona, Spain. CIMNE was created in 1987 as a Consortium between the Catalan regional government and the Universitat Politècnica de Catalunya, with the support of UNESCO. CIMNE employs some 150 scientists and engineers from different technical fields and nationalities (over 15 different countries) in the development and application of numerical methods to a wide class of engineering problems aimed to achieve positive economic and social impact with innovative technologies.

CIMNE has developed a Virtual Learning Centre devoted to teach advanced engineering topics via Internet (http://www.cimne.com/itsWeb). CIMNE has also specialised in the development of decision support systems and inference engines based on AI methods based on the Monte Carlo method and Neural Network and IT tools such as XML editor Internet portals and user-friendly interfaces for simulation software. CIMNE has received one of the 2002 IST Awards for a new software product named GiD [GiD 2003] for pre-processing analysis data and the visualization of numerical results from computer simulations (see www.it-prize.org/winners). Also, on 11th February 2003 CIMNE received the City of Barcelona Award in Technological Research for the development of GID system “an innovative and easy graphic interface for modelisation and visualisation of numerical simulations results”.

In almost 20 years CIMNE has taken part in over 450 RTD projects with over 200 companies and organisations. Around 90 of these projects have received EC support through FP3-7 programmes. CIMNE has been the coordinator of more than 25 EC funded projects (including a cluster of projects in the IST programme). The outcome of the research is recorded in over 1000 scientific publications, technical reports and educational software codes published by CIMNE. CIMNE has also successfully organised some 300 courses and seminars and about 50 international conferences. CIMNE will be responsible for administrative coordination of the project, and have important roles in dissemination and in the scaffolding models in WP2.